My Medical Team permits (even within the world of "moderation," encourages me) to have meaty treats. Theoretically, I could have turkey meat (depending on how it was prepared), and even the giblets in the stuffing. But the herbalist who put me on the diet of "no, never's" will not bend the rules for dairy. Ever. Ever.

I did get a special dispensation for occasional... occasional... stealth dairy within a hamburger bun. But that's as far as he'll go. And that certainly won't take you very far with a traditional/standard American Thanksgiving meal.

Now, if you think about Your Basic Thanksgiving Dinner, it's a dairy-delivery system, which uses a variety of meats and starches to keep tastes interesting. Martha Stewart's turkey technique involves (at some point) draping a cheesecloth over the bird and basting it with butter, as it bakes. If you're ever using French techniques, you'll definitely monter au buerre to finish a sauce. Besides using cream or creme fraiche in the sauce to begin with, whether you finish with butter or not. Mashed potatoes? The Joel Robuchon "ultimate mashed potato" recipe is basically half and half potato and butter, and my once-a-pastry-chef brother uses sour cream and butter in his mashed potato recipe. Many basic pumpkin pie recipes call for condensed milk. Topped with whipped cream, of course. Or ice cream. Or both. And of course, there's butter in the crust, no matter what kind of pie you're baking. And let's not talk about the dairy content in cheesecake.

You get the idea... When in doubt, throw butter in it. Thanksgiving is not a good day for "no dairy" diets.

Unless, of course, you have a vegan Japanese restaurant nearby. 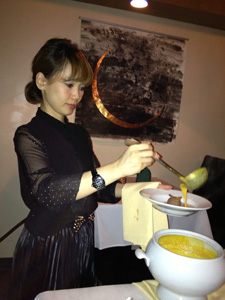 Table-side service from a tureen is a very French way of serving, but the soup they were serving was definitely vegan. In this case, kabocha (green-skinned Japanese pumpkin, makes a great soup). There's no milk in anything. But it tastes wonderful anyway.

Even the desert is safe. The "ice cream" is ice something, but it ain't "cream."

With hot cranberry sauce poured over the deep-fried rolls at the right of the plate, table-side. Delightfully French-inspired. But 100% non-dairy. Hooray!

The moral of the story is: Limitation doesn't have to be limitation... if you have fun anyway. Something that we who travel the M.S. Highway need to remember...

Posted by Robert Parker at 7:21 PM

Because I'm not on a dairy-free diet, I never gave much thought to how many dairy products go into the average Thanksgiving meal! Yikes! Our turkeys were butter-free and just basted in their own juices. The stuffing had no dairy, either, nor did the squashes and cranberry/pear chutney. However, everything else did! Your Japanese meal looks scrumptious! Hope you had a great day!
Peace,
Muff