Still in the hospital. Where "this MS thing is different every day" finds all sorts of new demonstrations...

I've been using a "condom catheter" for several days, to get around my bladder's non-cooperation. It's also called a "Texas catheter"... nobody knows why, but many of them say it's a very fitting name. There was a malfunction one day that caused it to become a plug rather than a hose, but thankfully that has been remedied.

One of the neuro's here got me going with IVIG, which I've been tolerating extremely well and that may actually be helping... simply the act of "standing up" is significantly easier than it was before I started.

He's also talking me into going for Ampyra (why the manufacturer's want it pronounced "am-peer-a" than "am-pie-rah," I have no idea) once I'm outta here. The hospital pharmacy doesn't stock it (no surprise there), but he says it'll be easy once I get outta here. And it's oral!

It's not a "disease-modifying drug," it's actually supposed to fix specific things. To use the electrical-system metaphor, if the a nerve's insulation is bad, this will try to repair it; if the core "wire" is bad, that, it can't fix.

And especially reassuring to me, its description doesn't involve "is thought to." I hate that "standard verbiage." HATE it. "So, you're telling me that you actually don't know what it does?"

I told the doc that I live in fear of discovering the new turn-your-brain-to-jello Tysabri, that everyone I know on a "standard MS drug" spends six days wracked by the way it makes them feel but then gets one good day, after which the cycle repeats... infinitely... and the MS never gets better. He says that doesn't happen with Ampyra, and a toxicologist I know who works for a Big Pharma said that he would take it, so I think it'll be OK. (Toxicologist, by the way, described what he did as being a pharmacist who only saw side effects.)

And the very first TV program I saw this morning was the greatest cartoon ever made: What's Opera, Doc? I'm hoping that this augurs well for the rest of the day...

Except the final words are, of course, "What did you expect from an opera, a happy ending?"

Well, I certainly expect one.... 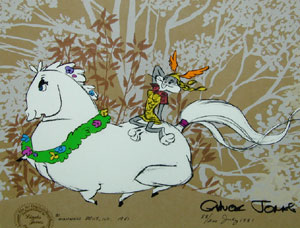 Posted by Robert Parker at 8:55 AM

So glad the IV is working for you! Let us know how the Ampyra goes.