For those of you who are not (yet) familiar with my stories about dealings with B-san, or as us anime-fans Japan-o-philes might call him, "Mr. Bladder," a brief introduction: I have more familiarity, as you might imagine, with the specific issues of MISTER Bladder rather than MISS Bladder, so that's where we'll be going today.

B-san is basically a balloon. Think of Alan the helium-filled balloon from The Amazing World of Gumball, who tragically enough is in love with a cactus, but that's another story. Anyway, here's Alan:

That's basically the right shape and tensile strength, for a "bladder analog." Imagine for a moment that the string is a catheter, and instead of a knot that ties balloons off, it's actually going to be a sphincter surrounded by the prostate. Because of the process of catheterization, getting things past that prostate-surrounded sphincter, I call it the "pros-gate" rather than "pros-tate." Gotta get it through the gate before the catheter can work as a straw, right?

B-san, for me at least, definitely has Issues. Sometimes he complains loudly and bitterly over not having really all that much to offer, emptying-wise. (What, you have a mercury-bulb-style thermostat? Pee-o-stat? You yelled this loud for 75 cc's of urine? that's all you got? What exactly is setting you off, I wonder.) Sometimes he says nothing and surprises me with the amount he has been holding.

Without complaining. This time. Not like 3:45 this morning, yes 3:34AM,  when he awoke me very insistently, but produced a Really? That's all you got? amount by the end of the process.

Nonetheless, as my urologist told me about being in the Cath Club, everyone with MS eventually has to go down this road. So if you're stuck on a road, you might as well enjoy the scenery and do your best to avoid the potholes.

First thing that's gotta be ready for accepting the catheter is B-san himself. Although the tubes don't move around that much, the end of the tube can; B-san can twist about into all sorts of un-catheter-friendly positions. When it's psyched to empty, though, everything hangs in precisely the correct position. So if any Cath Club members have issues just getting the cath started... it may be B-san in a poor position. Wait a few minutes, no matter what he says, and try again, you may very well have a significantly easier time of it.

Right catheter makes a huge difference. A friend of mine has been using the same kind of catheter for over eight years, but what he uses is nothing like what I'm currently using. It took a few tries to find the one that really works well for me, but once I found it, catheterization became simplicity itself. Such simplicity that once I found the correct cath, it was very much a "And you thought this was difficult? You were afraid of this?" moment.

And it's B-san's untrustworthiness that makes it ... challenging... yeah, let's go for the nice word, challenging, to leave the house and go to dinners or concerts of whatever. If B-san is in a good mood, I can wait with no problem. Cath before I leave the house, cath upon return. No problem! But if B-san is in a screamy mood, or if something I've had to eat or drink has gone wicked diuretic on me, maybe I might need to cath while I'm still out of the house. Which is difficult; I need a mise en place to help me deal with all my gear, keep everything clean (as best I can, at least), keep liquids where we want them, under control, and guard against "catastrophic containment failures," as my wife the environmentalist has sometimes been known to say.

Cathing is easy. Dealing with all the cath stuff (equipment & related Things) is hard. Especially when you're trying to maintain cleanliness (sterility, I get only when I'm really careful/lucky... but fortunately I haven't gone down the infected-myself route so things, so far, seem to be working well enough).

And if nothing else, imagine B-san with an expressive face, just like Alan pictured above. At worst, you'll get a smile out of it. You will smile. Which, for this world or Gumball's own amazing world, is a pretty good place to hang out.

And really, Gumball fans, better Alan than Tina Rex, the dinosaur... We got enough problems with B-san the Balloon as it is. 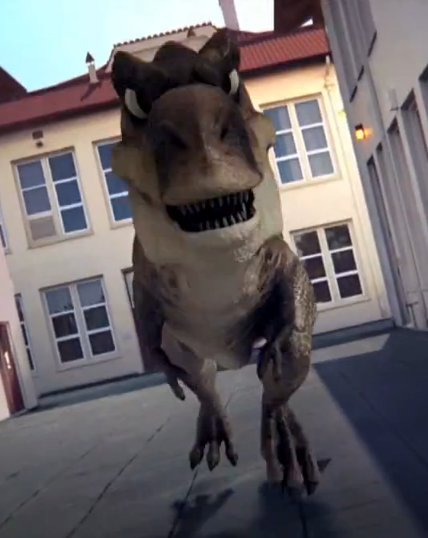 Posted by Robert Parker at 9:26 AM