Another "art imitates life" moment... First, some context... a "prelude," as it were.

Sunday, I attended a concert by a thoroughly delightful and musically amazing group, Red Car Trolley. The performance was held at the Church of Our Savior in San Gabriel, California (interestingly enough, the burial place of George Patton—yes, that General George Patton). They performed madrigals of many times and countries, including a setting of the Shakespearean text O Mistress Mine by yours truly. (I'll share a recording if I can put my hands on one; and another performance of other music, including both U.S. and world premieres, will come to pass in May. Details to follow!) 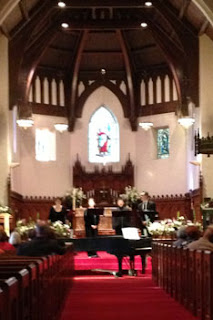 After the concert, I was given a tour of the organ from the organist-at-the-console's point of view—not a "crawl through the chambers" tour, but an audio "show and tell" of different divisions and specialty stops. A very lovely instrument, featuring some work done by Manuel Rosales, the same person who built the organ spectacularly adorning L.A.'s "Walt Disney Hall;" this church's organ also featured some very extravagant digital additions from Rogers (organ buffs will remember this company fondly as the makers of "Black Beauty," Virgil Fox's touring organ). 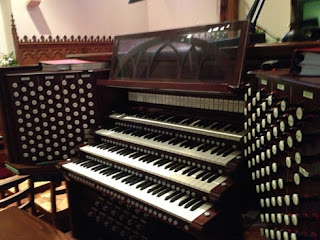 The organist very generously allowed me to give it a try. And, just trying to get onto the bench, I nearly fell over/off. Didn't, but nearly did. But most telling to me was that I usually "connect," very much on a spiritual level, with the instrument. But not yesterday. Perhaps it had something to do with almost falling off, perhaps it had something to do with the bench being adjusted for someone who was very clearly not me, but it was very strange. I couldn't connect with it. Could. Not. Connect with it. And that has never happened before, even on organs immensely more complicated/larger. It was very, very strange... But I could tell—that non-connection meant something. It was indicative of the end of the "organist" era that I had always known. The organist that I had always been, was definitely, definitely... gone.

End of prelude... The "console almost-incident" was just the "warm up" for a call that was made to me this morning. One of the administrators at the school I used to work for called to see if I might be playing for commencement? Which I've been doing for the past forty years. And, sadly, having spent no small time addressing this question in consultation with very dear, trustworthy, and very wise friends (one of whom has known me for more than thirty years), and having very nearly fallen spectacularly off the bench of the instrument that had always been "mine," that I had always loved so very much... I said "No." Specifically, my answer was "I can't." Which is very true, especially in the context of "almost falling of the organ bench" that I just barely avoided Sunday, even more "especially" since the organ I would have been playing is even trickier to get on and off and to operate than the one I nearly fell off of.

But I needed to come full-on to face a hard truth... which brings me to an "art imitates life" moment, from (of all things) the animated series Adventure Time. Finn the Human (one of the two central protagonists) tells Princess Bubblegum that he wanted to love her, and he tried to love her, and she wouldn't love him back, and at this particular juncture, he thought that she was trying to reconnect with his emotions in a way that had already been tried and failed, and was now behind him... And Finn said: 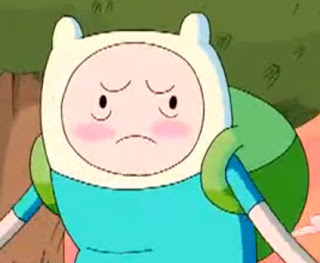 And that was hard. Is hard. It hurts. I'm sure I've still got processing to process. But the hard part was copping to the truth. That... I'm... done.

But necessary. Not huge-air-quotes "tragically" necessary. Just necessary. In its own way, blessedly necessary. Because... it was time. Time to just... let it go.

And making that connection starts with the truth... Which is, in this particular instance, this specific circumstance, this..."this," this "now"... The truth is:

Being done is difficult. Grieving takes courage. And MS is so much about loss and change.

Thank you for your wise words. They were helpful this morning.