Well, I finally made it back from the TMEA (Texas Music Educators Association) conference in San Antonio, Texas. A whale of an adventure, it was... and given how big they do everything in Texas, calling it "a whale" of something doesn't do justice to its size.

Not just "so many experiences," so many layers of experience. I think I'll approach them one layer at a time... otherwise, this entry is going to be the size of Texas, and take as long to journey through.

The first question in many minds is sure to be "What the @$# were you doing in Texas?" Last year, some kind and enterprising souls approached me because they wanted to perform one of my pieces at this convention, would that be alright? If you heard the words "hell YES" echoing through the land, that was me answering the question.

It was performed by the All-State Mixed Chorus, and the University of Houston Symphony Orchestra, conducted by Dr. Brad Holmes of Millikin University. For those of you (like me) who are unfamiliar with the Texas "All State" nomenclature, it basically means "the best of the best of the best." The chorus of five hundred who performed my work were winnowed down from a sea of 14,000 applicants, drawn from schools across the entire state. And dang, it's a big state.

The performance was totally cool. Awesome! As they say on Adventure Time, mathematical! I'll share a recording of the performance as soon as I can get my hands on one, but dang, was it amazing. You know those videos of meteors exploding that have been hitting (as it were) the web recently? Imagine something not crashing down and burning, but shining that brightly but ascending, straight up into the heavens... and that's what the performance was like. And even that doesn't do it justice. It was... amazing. 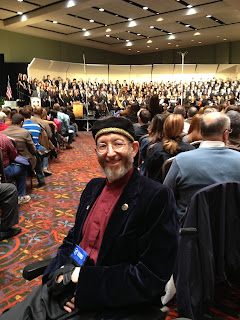 A photo taken just before my piece was performed. And come on, look at the size of that choir!

But as amazing as that concerts, and all the concerts at this convention were, what was most amazing was something that no Neurological Nonsense could ever impede, or impair, or effect in any negative way.

A lot of Us Old People were in powered scooters. I was the only one in a self-powered wheelchair, but I wasn't the only one who spent the entire conference seated. Many, many, many canes and crutches and walking-assistance devices of all descriptions. And none of that mattered. What mattered was that a teacher touched the heart of a student, and that those students reached out to one another and their hearts touched, and then all those hearts joined together in making music and touched the hearts of everyone who heard them.

With the power of all those hearts, with the sound of those Heart Songs making heaven and earth resound with their beauty... multiple sclerosis has nothing. IS nothing.

So, lesson one of TMEA... F---k this disease. It is nothing. Nothing. Sing your Heart Song, whatever that song may be. Touch another heart, and sing together.

Congratulations!! I look forward to hearing it when available.

I think your visit to Texas has done marvelous things for your psyche! Congratulations on being brave enough to take on the trip, for having your music chosen to be performed in such an awesome venue, and for lifting your spirit along with that music!
Peace,
Muff