Took a quick jaunt down to the Rose Bowl today, to watch the space-shuttle-shuttle flyby.

Well, unfortunately, it wasn't as quick as I'd hoped... of course the "bladder alarm" went off, while I was sitting in the car, in the just-above-comfortable heat, waiting for the Magical Moment to arrive. That'd be the shuttle flyover, not my bladder, of course.

So, it's not crowded, but there are quite a few people around, and I think, Great... even if I use my P-cup and do it in the car, there are all these people around...

And then, it dawns on me: Every last person here is staring up at the sky. I could take my clothes off and lie naked in the bed of my truck, and nobody would ever see it, because they're all looking up at the sky, hoping to catch sight of the shuttle.

So, I make hasty furtive use of The Cup, praying desperately that this moment is not going to be the time the shuttle flies over and I miss it because I have to pay attention to what I'm doing...

Success. No missed shuttle flyover. I feel great about making it through this moment of challenge.

Apparently, B-san (Mr. Bladder) doesn't like committing. I thought you were done, I think... Nope, he says, I've still got a lot to give... and I want to give it now NOW NOW!

So, Furtive Desperate Use of The Cup, take 2... and again, I get away with it. Everyone's still looking at the skies. And I don't miss the space shuttle flyover.

A narrow escape. But a successful one. In not that many moments, the shuttle finally flew by, and it was totally cool. I was especially surprised at how... dinky it looks, when compared to a 747. And a final note—apparently, it took a long time to get to where I was waiting because it was flying by the Hollywood sign and the Griffith Observatory, time after time. Now, I'll admit, that's definitely a fantastic photo, you can catch it and many others on the web, but still... JPL and Caltech helped get, and keep, the bloody thing in the air, they could have done multiple flybys for them, too. After all, it's only fair.

But, their delay was my blessing, in my Battle With The Bladder. A small and quiet triumph, but a triumph nonetheless. 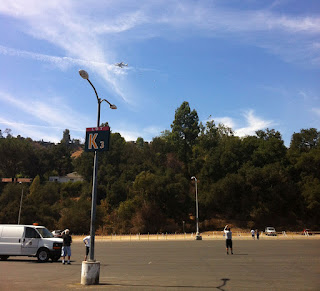 Posted by Robert Parker at 7:37 PM

Wow, that sounds awesome -- the shuttle part, I mean. The other, well, know that you're not alone!
Peace,
Muff